At nineteen, even though she stated that she was staunchly “anti drug”, Joy did not understand that she was an addict – that there can be a genetic predisposition towards addiction which often manifests itself as a result of a traumatic event.

Growing up, Joy’s life wasn’t always stable. Originally from Sydney, her parents divorced when she was a child and she moved to Brisbane with her mother and step father. In this time, Joy changed schools three times and spent a lot of time being ferried between the two cities.

When Joy was eighteen, she experienced painful trauma when her best friend passed away. Soon after she began to experiment with drugs, starting with ecstasy and weekend party drugs, quickly progressing to cocaine, and eventually ice.

For Joy, being controlled by drugs made her feel out of control.

She tried her best to remain functional, completing a Cert 3 in hairdressing and a Diploma in Make Up and and tried to keep a job working in retail, and a steady house.

However, this didn’t last. “Eventually everything fell apart,” reports Joy. “The last two years became unmanageable, I couldn’t work, I resorted to crime. I was very unstable.”

There were some attempts made at rehab, most being thirty day detoxes. However, Joy would fall back into drug usage as soon as they were completed. By this stage, Joy’s family had disowned her and she was living on the streets.

She shares, “I definitely knew deep within, that I needed to go to rehab. I was living like a pig, I was on the streets. I had no hope for my future and honestly thought

I would have ended up dead sooner or later.”

Although Joy understood the need for rehabilitation, her addicted mind believed otherwise, and getting Joy to the Hader Clinic required a strong intervention from her family. She describes that the physical detox isn’t so bad, but the fight to stay clean and free of drugs is the biggest battle.

Joy managed to detox four days prior to starting Hader’s ninety day residential addiction treatment program. She describes “feeling in la la land” for the first thirty days and didn’t realise the extent and depth of the program.

The structure of the program – daily meetings, chores to perform, counselling etc – was confronting, making Joy realise that there was a lot more work involved in the process of rehabilitation than merely detoxing.

Over the course of the ninety days, Joy had her moments of wanting to quit and go home and describes these challenges.

“I thought, ‘this is too hard’. All I felt I had known was the environment of substance abuse and I needed to stop and learn how to be myself again.”

Living in a community of recovering addicts and learning to relate to, and share with others, presented an unexpected challenge to Joy as well.

“When I was using, I was a rock star, I was queen of the world, I didn’t need to relate to anyone else”.

Detoxing and spending three intensive months working on herself made Joy realise how much of her being she had lost to drugs. She shares that her drug use had made her lose the ability to feel and recognise her emotions and learning to understand and appropriately deal with these feelings also presented a challenge.

At the sixty day point, Joy decided that she was going to stick the rehab process out. “If I didn’t break the cycle, I would have lost all hope for living. It’s hard work, but I need it.”

While she embraced the “cotton wool” environment of the rehabilitation facility, having intensive support whilst tasting “real life” has been beneficial.

She explains: “when you get out it’s about being able to put the tools you have learned in rehab into practice – going to the NA/AA meeting, doing and reflecting on daily readings, and journaling – that really helps. I also have the other members of the house and the Hader Clinic as a support and guide.”

Joy describes a typical day in the transitional housing.

“We get up at 7.30am, just as you do in a normal working day. We have a group check in and meeting and report/share about our last twenty-four hours. Then we head off for an NA/AA meeting. We have some free time and in the evening, have a community meeting. We focus on twenty-four hours at a time, share stories and support each other.”

Transition hasn’t been without challenge as Joy reports her wobbly moments.

“There are lots of triggers for me – music, certain locations in the environment. However I always have the support of the crew in the house. I’m attending counselling and learning to sit with the triggers and ride the wave.”

She states, “it helped me to respect the staff and understand what type of life was truly possible.”

How does Joy feel no longer using drugs or alcohol?

“It feels great to be free of it. It wasn’t just one substance, it was about three. I needed it when I woke up, when I went to bed. I still get really emotional. I am enjoying learning to live in the moment, to smell the coffee, to be present with my family. Now, I’m actually hopeful for the future. I’ve enrolled to study a Diploma of Beauty Therapy and want to develop my career as a beautician. The future holds more stability – I want to be good with my family, go to Uni, get my driver’s licensee. My independence and freedom is coming!” 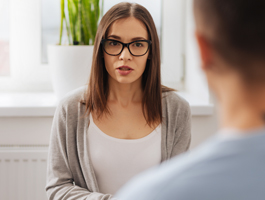 Paula is one of the support staff at our Brisbane rehabilitation centre. She is also a recovering addict. This is her addiction story.
Read more